“Aw, what a gorgeous boy! What breed is he?” 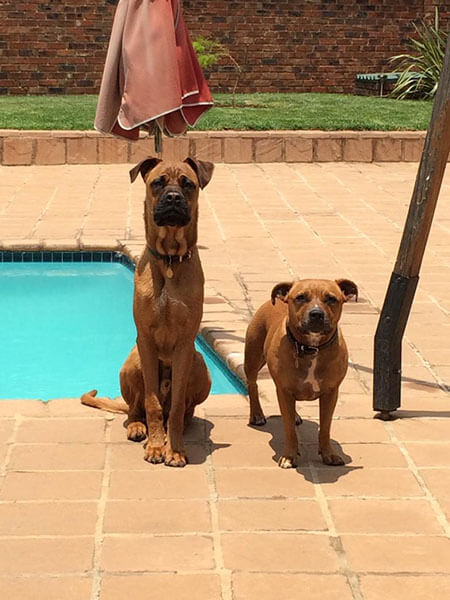 Woola came into my life 5 years ago as a 3-month old puppy when I was quite happy with my 2 Staffies and not looking for another child. But clearly, he was looking for me. We found him late one night with his head stuck in the electric gate of the home opposite ours. Horrific images flashed through my mind of what could happen if the home-owners came home and opened the gate without looking at it (as we all do most of the time). I rushed back home, grabbed a bottle of cooking oil and poured it over him to lubricate him well and pulled him out of the gate. Without thinking I took him home and only then pondered on what to do with him. When my then-husband asked if we should keep him, my response was, “if Judy will let him stay.”

I joined SADTC 9 years ago when my monster-child Judy, a beautiful Staffie, was just a pup. She was a wild child and needed some rules, something that I had never learnt to apply to my paw kids. So, I scoured the Net, searched local papers and interrogated my friends and acquaintances to find the right School for my Monster. My search brought me to SADTC. And I’ve never looked back. Judy’s first year of training was fantastic and I debunked all the myths about Staffies being untrainable. She won trophies and certificates in Obedience, Agility and Manwork.

Judy unfortunately became extremely dog-aggressive. We persevered for a further year but eventually the emotion of her aggressive behaviour became too much for me and, sadly, I left SADTC. So, when this strange little foundling happened upon us, it was Judy’s decision. And, thankfully, she acquiesced and allowed him to stay. Of course, I immediately knew what I had to do – enrol him at SADTC.

That was 5 years ago.

But why did I go back to SADTC?

Quite simply because they’re family. There is a care and concern that one finds among the handlers and instructors at SADTC that makes going to school each week and back again after the holidays each year a no-brainer. It goes way beyond our children – it’s a soul-fit. Going to school is more than teaching your dog and being with other like-minded people, its being part of a group of people who truly care; if you’re not at school they’re concerned about your well-being; there’s no judgement only support and love. And when things in your life go pear-shaped, here’s a bunch of wonderful nutty people who will just hold your hand through it all and keep you going one “on the move recall” at a time. 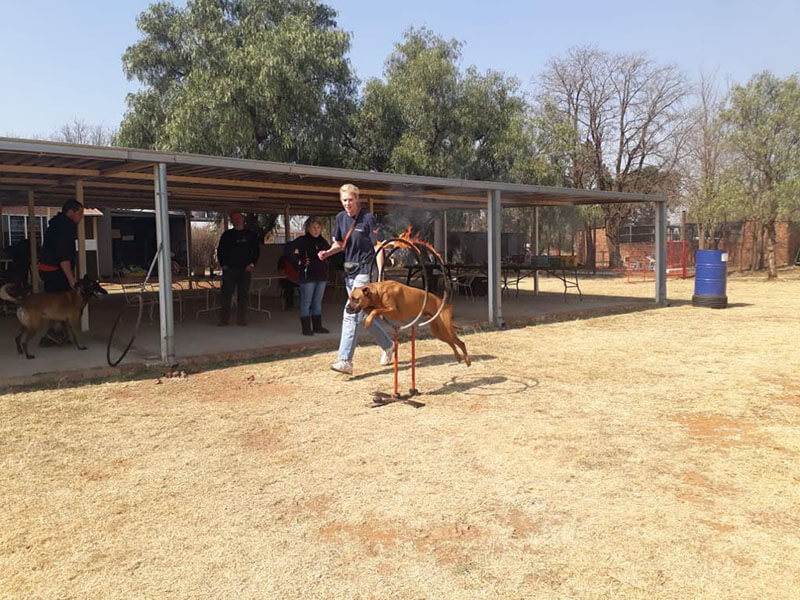 SADTC is the type of place that gets under your skin. If any one of us handlers put in just one ounce of the amount of the effort that Chris, Christine and the instructors put in, I think the world would definitely be a better place. I only wish that most of the newer handlers would get more involved and stay longer at school after their class to see what goes on and enjoy the life of the school. Because it’s in between classes and at other events where the enjoyment of being part of the school really starts. This year Christine encouraged me to compete for real. It was at an Open Show at Goldfields and the excitement of seeing how Woola performed “out there” in the real world was amazing. I think the fact that I got a first didn’t hurt either. But seeing how the SADTC entrants into the competition fared – well we took 1st, 2nd and 3rd places – that speaks volumes for the standard of training that we receive at SADTC. Then there’s the Demo that we did at the Jeep Show – Woola learned to jump through fire-hoops. I was really skeptical at first because he’s a real scaredy-cat sometimes but he taught me to trust him and showed me how he would jump through hoops for me.

And speaking about what Woola has taught me, well where do I start? He’s taught me the big and small things in life – that expensive toys are ignored but an old bicycle tyre being thrown and caught is the best part of the day. What’s truly important and what’s not – that, as the passengers in a dirty car, they will be the last to judge me but if we don’t go to school today, well that’s unforgiveable! or like the fact that the bathroom is not mine and mine alone, it’s a communal gathering place. I’ve learnt to appreciate different things – although I miss them all day when I’m at work, at least there I don’t have dog hair in my nose. And just how different my two pawdkids are – like Judy’s cool, soft, satin licky kisses and Woola’s hot, wet sandpaper tongue. Woola is addicted to body cream – the moment I’ve applied it to my legs, it’s crucial that he licks it off immediately. And forget about sleeping where you want to in the bed – I get to sleep in the space where Woola and Judy are not, and I’ve learnt to be happy with that, so much so that I don’t sleep so well anymore if I’m not the in the middle of a canine sandwich. 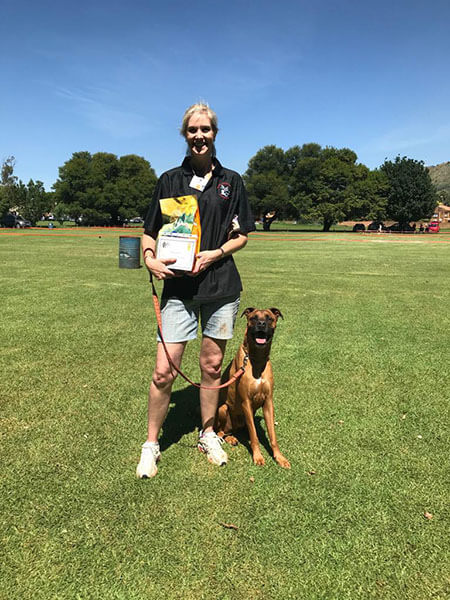 And Woola has also taught me a lot about himself. Although he looks and acts goofy most of the time, I’ve discovered that he’s highly intelligent (when it suits him) and that we only have to do something once for him to adopt it as the norm. At home his retrieve is gold-standard and he understands an entire conversation of instructions from me and carries them out to the letter. At school, well I know that the way he spits his dumbbell at me is a bit of a joke in our class. And he simply refuses to release his retrieve object. He has an incredible nose that will sniff out things in the most obscure corners of the house; but oh, if I could only put that to work at school – is formal scent-work is non-existent. As I was saying about his intelligence – he knows how to push my buttons and then how to make me fall in love with him.

Woola has taught me patience – I call him my Velcro child because he will not leave me alone. From the fridge, to the counter, to the stove, he will follow me around the kitchen. From my bed to the wardrobe to my dressing table, he follows me in the bedroom. But I’ve learnt that he needs to do that and no amount of trying to get him out the way will help so I take a deep breath and make sure I don’t fall over him and know that I will never be alone in my home.

He may be a goof-ball but there have been some really tough times in the past few years that I know I would not have survived had it not been for my kids. Not only did they give me a reason to get up in the morning but their unconditional love and special brand of salve on the heart-hurt is something that can never be bought and no pharmaceutical company can replicate.
My pawdkids are my life.

To all those who say “they’re just dogs” I say, you haven’t truly lived until you’ve spooned with a Great Dane-cross-Boxer.
He’s my half-a-horse and I love him.